What is Irritable Bowel Syndrome – IBS

In recent times, GPs and their patients have reported a rise of a severe gut condition that often prevents sufferers from leaving the house. GPs’ response to this, however, can be frustrating for sufferers, who are often told that the issue is “functional” or “psychosomatic”.

But the problem is not “all in the head” for the 1 in 7 Australians who suffer from Irritable Bowel Syndrome (IBS). Their discomfort is real, presenting as symptoms such as cramps, diarrhoea, pain and constipation (sometime all at once).

I’ve treated many patients suffering from IBS. These patients have sometimes suffered for decades without relief. They have been subjected to a gamut of tests, such as Gastroscopies and Colonscopies, with no relief. They may have been told to eat more fibre, or were prescribed sedatives, anti-spasm drugs, laxatives or even anti-depressants.

While these treatments often have unfortunate side-effects, they also aren’t particularly efficacious, as they don’t treat the underlying cause of IBS. There is however an emerging body of research that suggests that what causes IBS can, despite the advice of many GPs, be successfully treated. The answer is a simple methodology, using functional medicine. Here at Vital Health, we can identify the underlying causes and treat them.

I’d like to share some IBS insights with you. But let me first tell you about a patient who suffered IBS all his life.

Tony was sixty-eight when he sought help from a naturopath. He had suffered with the condition half his life. Reflecting on his medical history, he remembered he’s suffered consistently with IBS following a trip to Bali, in which he contracted bad food poisoning. The symptoms presented were painful cramping and diarrhoea, which would often come on suddenly. Tony took care of himself – he refrained from smoking and drinking, cut diary out of his diet, and took a fibre supplement. However, the suffering continued. Unfortunately, this can be common for people when food poisoning or a parasite infection is not treated decisively in the early stages.

Tony was going to the toilet five time in the morning before he’d even left the house. He planned trips to the bathroom, in case he had an attack of “the s__ts”, as he called it. Eating was a chore, as he often felt bloating and cramping after a meal. Starchy foods exacerbated the problem. He consumed many antibiotics, so often had yeast infections. He also had stomach inflammation (gastritis). He had sugar cravings, agitation, fatigue, headaches and rectal itching.

While he tried to eat healthy, sugar cravings led to a poor diet. He would consume cakes, ice cream, diet coke, and other junk foods to satiate his cravings. He was overweight, ten kilos or so.

To give Tony some relief from his long-term suffering, I educated him on how the digestive system works. There are two main causes of IBS: food allergies and overgrowth of bacteria in the small intestine. I will discuss here each in turn.

GET YOUR FREE CONSULT NOW

How Gut Bacteria Imbalances Can Lead to IBS

The small intestines absorb food, to give you energy. It’s also the first line of defence for your immunity (making up about 60% of your immunity). There is, however, only one layer of immunity between your gut immune system and the toxic sewer – all the undigested food particles in your gut.

When that lining breaks down from stress, poor diet, antibiotics, excess alcohol, aspirin and other anti-inflammatory drugs, food poisoning, candida infection, intestinal bacterial, or other issues, your immune system will be exposed to foreign particles. This irritates what we sometimes refer to as the “second brain”, the “enteric nervous system”, which can lead to irritable bowel and irritable brain, as well as mood disorders, allergy, autoimmunity, arthritis, among others.

To optimise your health, you need your gut to be healthy. When bacteria in your gut is not in balance, when you suffer with too many pathogenic bacteria and not enough healthy bacteria, you become ill. There are about 500 species, or 1.5 kilograms, in your gut. Among these bacteria, there are bad bacteria, good bacteria, and very bad bacteria.

If the bad bacteria take over or move into parts of the body where toxicity can’t be fought by the body’s natural defences, like the small intestine, they can cause serious issues. They will ferment the food you digest, especially if there are sugars or starches in the food.

Here at Vital Health, we can diagnose bacterial overgrowth with a breath test. This will measure the gas produced by bacteria – if you often feel bloated, this gas production very well may be the cause! Another means to test is via urine tests. This measures the bacterial by-product in your system.

IBS patients can greatly benefit from anon-absorbed antibiotics. After ten days, patients have seen a dramatic improvement in symptoms. However, for a lasting, comprehensive treatment to IBS, you need to treat multiple factors.

Another factor that may need treating in IBS is food sensitivities. These food sensitivities don’t rise to the level of actual allergies; they are rather small scale, but persistent, reactions, in themselves not major upsets, but driving chronic conditions over time.

How I Helped Tony Heal his IBS

To help Tony further, it was important to prescribe an herbal antibiotic. This acts to attach fungal and microbial imbalances. I also removed foods from Tony’s diet to which he was sensitive. By testing for the low-grade food intolerances I mentioned, I was able to identify the root of the problem.

Tony when through my course of therapy for a six-week period. When he returned, he was a different person. He’d lost his weight, about ten kilos. He’d not had any “sh__t attack”. His bowel habits were ordinary for the first time in thirty years! His bloating was gone; he felt energised. He said to me: ‘I feel ten years younger!’

The fact is, you don’t have to suffer through IBS, despite the common response from GPs. We have the scientific and therapeutic tools – and the clinical experience! – to deal decisively with IBS.

Seek professional help. IBS is by no means an easy condition to treat, if it was, 1 in 7 Australians would not be suffering from it today. But the fact is – here at Vital Health we have what it takes! 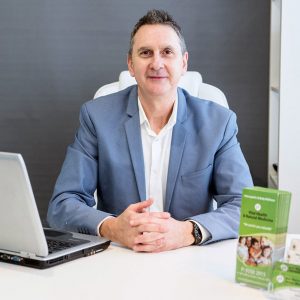 Domenic Pisanelli is a qualified Naturopath and has helped hundreds of people regain their health back as an experienced naturopath with over 18 years of clinical experience.

Vital Health and Natural Medicine is committed to ensuring that your privacy is protected. Should we ask you to provide certain information by which you can be identified when using this website, then you can be assured that it will only be used in accordance with this privacy statement.

We may collect the following information:

What we do with the information we gather

We require this information to understand your needs and provide you with a better service, and in particular for the following reasons:

We are committed to ensuring that your information is secure. In order to prevent unauthorised access or disclosure, we have put in place suitable physical, electronic and managerial procedures to safeguard and secure the information we collect online.

This website uses Google Analytics to help analyse how users use the site. The tool uses “cookies,” which are text files placed on your computer, to collect standard Internet log information and visitor behaviour information in an anonymous form. The information generated by the cookie about your use of the website (including IP address) is transmitted to Google. This information is then used to evaluate visitors of the website and to compile statistical reports on website activity for MyVitalHealthSolutions.com.au.

We will never (and will not allow any third party to) use the statistical analytics tool to track or to collect any Personally Identifiable Information (PII) of visitors to our site. Google will not associate your IP address with any other data held by Google. Neither we nor Google will link, or seek to link, an IP address with the identity of a computer user. We will not associate any data gathered from this site with any Personally Identifiable Information from any source, unless you explicitly submit that information via a fill-in form on our website.

A cookie is a small file which asks permission to be placed on your computer’s hard drive. Once you agree, the file is added and the cookie helps analyse web traffic or lets you know when you visit a particular site. Cookies allow web applications to respond to you as an individual. The web application can tailor its operations to your needs, likes and dislikes by gathering and remembering information about your preferences.

We use traffic log cookies to identify which pages are being used. This helps us analyse data about webpage traffic and improve our website in order to tailor it to customer needs. We only use this information for statistical analysis purposes and then the data is removed from the system.

Overall, cookies help us provide you with a better website by enabling us to monitor which pages you find useful and which you do not. A cookie in no way gives us access to your computer or any information about you, other than the data you choose to share with us.

You can choose to accept or decline cookies. Most web browsers automatically accept cookies, but you can usually modify your browser setting to decline cookies if you prefer. This may prevent you from taking full advantage of the website.

Links to other websites

Our website may contain links to other websites of interest. However, once you have used these links to leave our site, you should note that we do not have any control over that other website. Therefore, we cannot be responsible for the protection and privacy of any information which you provide whilst visiting such sites and such sites are not governed by this privacy statement. You should exercise caution and look at the privacy statement applicable to the website in question.

You may choose to restrict the collection or use of your personal information in the following ways:

You may request details of personal information which we hold about you under the Data Protection Act 1998. A small fee will be payable. If you would like a copy of the information held on you please write to info@myvitalhealth.com.au

If you believe that any information we are holding on you is incorrect or incomplete, please write to or email us as soon as possible at the above address. We will promptly correct any information found to be incorrect.